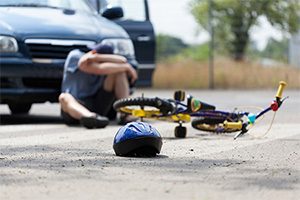 Bicycles are becoming more common in urban and suburban communities all across Georgia. Some cities have bicycle share programs where you can find locked bicycles at a rack with others that you unlock with a credit card. You are charged by the hour and when your ride is complete, leave it, hopefully, in a place that does not block pedestrians or business entrances or at another rack. Other companies have electric bicycles to rent with the same concept. However, regardless of if your bicycle is electric or not, you are at a major disadvantage when competing with motorists, and a collision can result in catastrophic injuries. If you are a bicyclist injured by an inattentive or otherwise negligent motorist, contact a skilled Smyrna bicycle accident attorney to handle your claim.

There are between 800 and 900 bicycle accidents per year in Georgia with about 80% resulting in an injury, some extremely serious. Although you are at slower speeds than a motorcyclist, you should still wear clothing that offers protection and is colorful, so you are more noticeable to motorists.

Cities have made attempts to accommodate bicycle riders and to keep them safe by installing marked bicycle lanes on the sides of roadways, and traffic signals especially for bicyclists. This has resulted in fewer accidents, though there will always be the frustrated and disgruntled motorist who feels that bicycle riders are impeding traffic and do not belong on the streets, as well as the inattentive, impaired, or distracted drivers.

Bicycle riders also need to be aware of the traffic laws and those pertaining to them. When on a bicycle, you are not a pedestrian. You are required to obey all traffic laws such as stopping at red traffic signals and stop signs, signaling when turning, and not riding while impaired.

The following are laws that all bicyclists need to know and follow:

Other safety tips include never riding on a roadway facing approaching traffic as this increases your risk of being struck by a car by 2 to 4 times. Avoid riding at night if possible since most fatalities occur during non-daylight hours.

When Motorists Cause Accidents

About 45% of accidents involving a car and a bicyclist occur at intersections.

Some of the more common situations where motorists are at fault include:

Bicyclists also need to be proactive in being more visible to motorists such as wearing bright clothing and catching the eye of motorists when turning. When approaching an intersection, even in a marked bicycle lane, assume that the driver does not see you.

What is Comparative Fault in Georgia?

If you were injured by a motorist but you violated a traffic law such as not stopping at a red light, failing to signal a turn, or riding recklessly, a court could find you negligent per se. This means that you are presumed to be negligent under the law unless you can present convincing evidence to the contrary. The same is true for any motorist who violated a traffic law such as making an unsafe lane change, speeding, or illegally driving in a bicycle lane.

There are circumstances where both parties may have violated a traffic law, such as where a motorist was driving impaired, but the bicyclist failed to make a clear hand signal of his intention to make a right turn. A skilled attorney can help you sort out the incidentals of your accident and give you sound direction on how to proceed with a personal injury claim. Don’t try to navigate a legal action alone. We are here to help you make sense of this tragic event and get the compensation you deserve after a personal injury accident.

Georgia is a comparative fault statute which means an injured plaintiff who may have contributed to the cause of the accident and his own injuries may still pursue an injury claim and collect compensation despite his/her own comparative fault. In such cases, your award would be reduced commensurate to your degree of causal responsibility. O.C.G.A. § 51-12-33. For example, if you are found 40% at fault, then an award of $100,000 would be reduced to $60,000. However, your own percentage of fault cannot exceed 49% or you will not collect any compensation at all. Should both parties be found equally at fault, you cannot collect anything.

If you are struck by a car, chances are that you will be ejected and may land on the roadway and, hopefully, not on top of a car or into traffic. Most accidents result in scraped arms or legs or a broken limb, but a serious collision can cause serious head injuries, including traumatic brain damage. Your damages in serious accident cases can be enormous, which is why retaining an experienced Smyrna personal injury lawyer to handle your claim is essential to proving liability, supporting your claim of damages, and finding and holding accountable all responsible parties. For instance, the city or county might have been negligent in road design or maintenance that might have contributed to the accident, or the negligent driver was a municipal or state employee acting within the scope of his public employment. Occasionally, a bicycle shop negligently serviced a bicycle and a wheel fell off or the brakes failed to engage.

Damages often include past and future medical expenses, income loss, loss of earning capacity in serious injuries, emotional distress, and pain and suffering. If the other party’s conduct was grossly negligent or especially egregious, then you could claim punitive damages.

Contact a skilled Smyrna bicycle accident lawyer if you’ve suffered a serious injury in a collision with a motor vehicle or due to the negligence of another entity or party. We are available to Smyrna, GA injured victims 24/7. Reach out to us by phone at (404) 665-9665, email, or fill out our online form to schedule a free, confidential consultation. Our experienced legal professionals are standing by to help you seek justice and get maximum compensation for your injury.